Indonesian paramilitary police have shot and killed one person and wounded a number of others at a protest in a West Papuan village, according to human rights groups and local witnesses.

A 28-year-old man was reportedly killed during the incident in Deiya regency on Tuesday afternoon, and up to seven wounded, including at least two children.

The regency’s parliament has reportedly called for the arrest of the officers involved, and for the withdrawal of the police mobile brigade, known as Brimob.

The incident began after workers at a nearby construction site refused to assist locals in taking a man to hospital, after he was pulled from the river.

After a five hour delay in sourcing another vehicle the man died on his way to hospital, according to local sources. Angry relatives and friends protested against the construction company, allegedly attacking a worker’s camp – believed to be primarily from Sulawesi – and destroying some buildings.

Authorities were called to the protest, and Associated Press reported police alleged protesters kidnapped a worker, which protesters denied.

“There were no warning shots at all,” witness, Elias Pakagesaid. “Officers immediately fired on the unarmed villagers.”

A human rights lawyer investigating the case, who requested to remain anonymous, also said there was no verbal warning from authorities, and she labeled the incident an extrajudicial killing.

“When they arrive they just shoot. They used guns and violence and shoot directly,” she said.

Unconfirmed reports said 17 people were shot by the police mobile brigade, including the deceased man and a number of children.

Pictures purported to be of the victims and seen by Guardian Australia show deep bullet wounds.

According to local media, police denied they shot directly at the protesters, but rather at the ground and hit four people after warning shots failed to calm the situation.

The head of public relations for Papua police, Kombes A.M. Kamal denied anyone died other than a person who was critically ill, and alleged protesters had attacked an employee.

A separate report quoted the spokesman as saying the police only fired rubber bullets.

The lawyer said the police spokesman’s claims were not true, that the hospital doctor had recognised the injuries as bullet wounds, and that one young man died of his injuries, not an illness.

Dr Eben Kirksey, a senior lecturer at UNSW, said there was often a “disinformation campaign” by authorities following incidents in West Papua.

“If we look at the history, of when there is evidence of security force misconduct I don’t have much hope.”

The Asian Human Rights Commission called for a full transparent investigation by human rights groups, and for the officers to be held accountable. 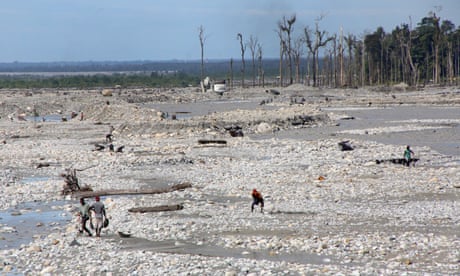 There are frequent reports of violence and mass arrests by authorities against West Papuans, the indigenous people of an Indonesia-controlled region on the western half of an island shared with Papua New Guinea, and which has battled for independence for decades.

But information is difficult to verify, largely because of the restrictions on foreign media.

In 2015 Indonesian president Joko Widodo announced the lifting of the media ban for the province, but in reality, government clearing houses vet media visits and maintain restrictions. Two French journalists were deported earlier this year for reporting without the required visa.

The Jakarta Post on Wednesday called for the government to open up the province to the world’s media, noting the significant gains made by a “relentless” independence campaign.

It argued Jokowi should stop hiding his government’s purported improvements and developments in the region.

“At almost every turn, we are being outmaneuvered by campaigners who want to see Papua separate from Indonesia. And yet the Indonesian government has done very little to counter it,” it said.

“By maintaining this restriction, the government is operating like a paranoid regime, afraid the outside world may find the skeletons it hides in its closet. If the government has done much to improve the lives of Papuans, why not show it to the world?”