An area twice the size of Paris has been destroyed by Gama, a palm oil business run by senior Wilmar executives and members of their family. Photos and video taken by Greenpeace International on a recent flyover show active deforestation in two Gama concessions in Papua, Indonesia.[2]

“Our investigation has exposed Wilmar’s dirty secret. For years, Wilmar and Gama have worked together, with Gama doing the dirty work so Wilmar’s hands stay clean. But now the truth is out, and Wilmar CEO Kuok Khoon Hong must act now to save his reputation. Wilmar must immediately cut off all palm oil suppliers that can’t prove they aren’t destroying rainforests,” said Kiki Taufik, the global head of Greenpeace Southeast Asia’s Indonesian forests campaign.

Gama, one of Indonesia’s largest palm oil plantation companies, was set up by Wilmar’s co-founder, Martua Sitorus and his brother Ganda in 2011.[3] Gama’s concessions are owned and managed by members of Ganda’s and Martua Sitorus’s family, which includes Wilmar’s Country Head and Deputy Country Head for Indonesia. 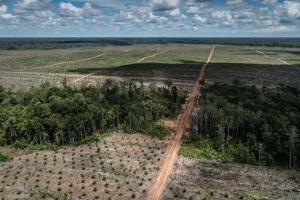 In December 2013, Wilmar became the first palm oil trader to publish a ‘no deforestation, no peat, no exploitation’ (NDPE) policy that applied in its own plantations and those of its suppliers. Mapping and satellite analysis shows that Gama destroyed 21,500ha of rainforest or peatland since Wilmar made its commitment [see report].

Wilmar also has a history of evading responsibility for environmental and human rights abuses by selling off its most controversial concessions to Gama.[4]

Analysis of trade data shows that Wilmar continues to trade palm oil from Gama to many of the world’s biggest brands, despite being aware that Gama was violating Wilmar’s NDPE policy by clearing rainforest.

“Wilmar has been trading Gama’s oil all over the world, including to brands like P&G, Nestlé and Unilever. Brands cannot let this deception pass unchallenged, and have no choice but to suspend all business with Wilmar until it can prove it only trades clean palm oil from responsible producers,” said Kiki Taufik.

Wilmar denies having any influence over Gama, although it admitted in a fax to Greenpeace International that Gama is run by Wilmar senior executives and members of their family.[5]

Wilmar is on the board of the Roundtable on Sustainable Palm Oil (RSPO), whose bi-annual conference kicks off on Monday in Paris. At least one Gama company, S&G Biofuel Ltd, is also an RSPO member. Under RSPO membership rules, companies that share management or control should be treated as one group. This makes Wilmar responsible for what happens in Gama’s concessions.

Greenpeace is calling on the RSPO to enforce its rules by requiring Wilmar and Gama to register as one group and suspending Wilmar until the rainforest Gama destroyed is restored.

[2] Much of this deforestation has occured in just three of the concessions examined in Greenpeace’s report:

[3]  Like many family-owned companies in Southeast Asia, Gama does not have a formal structure; instead, it is a network of plantations and palm oil companies owned, managed or controlled by Ganda and Martua Sitorus, and members of their family.

Martua Sitorus is the co-founder of Wilmar and remains a board member. He is also CEO of Gama.

In 2004, Wilmar sold PT Jatimjaya Perkasa to Gama (then known as Ganda Group) following accusations of deforestation in the concession from Friends of the Earth.