Up to seven dead in West Papua as protest turns violent

Up to six protesters and one soldier have been killed in clashes across the restive West Papua and Papua provinces, although protesters and police dispute how many have died.

A source at one protest in the Deiyai Regency told The Guardian on Thursday that police had fired lived rounds into a crowd of demonstrators outside the regency offices on Wednesday. Six people were killed and two seriously injured, the source, who requested anonymity fearing reprisals, said.

“Shots were fired at the protesters, but people continued to sit in protest.”

Al Jazeera also reported that six protesters had been killed.

However, national police spokesman Dedi Prasetyo said the protest by about 150 people at the Deiyai district chief’s office turned violent when more than a thousand others tried to storm the building with arrows and machetes. 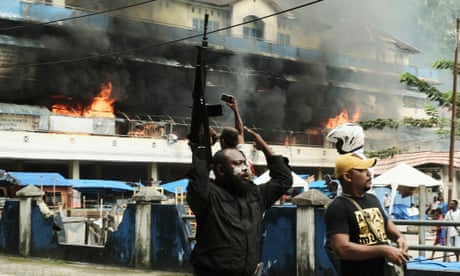 Prasetyo dismissed reports of six protesters being killed as “a provocation”, but said one soldier had been killed and three police officers injured in clashes.

“Security forces are trying to control the security in the area,” he said.

Papua military spokesman Eko Daryanto said in a statement that security forces managed to restore order and found two protesters had been injured, one with an arrow piercing his stomach and the other shot in the leg. Both died at a nearby hospital. A soldier died at the scene and five police and military personnel were injured, mostly by arrows.

A number of violent protests have roiled Papua since last week, triggered by videos circulated on the internet showing security forces calling Papuan students “monkeys” and “dogs” in East Java’s Surabaya city. Students say they are regularly subjected to racist slurs and abuse.

A group of 50 Papuan students in the capital, Jakarta, staged a second protest on Wednesday and called for independence for Papua, a former Dutch colony in the western part of New Guinea that is ethnically and culturally distinct from much of Indonesia.

Papua was incorporated into Indonesia in 1969 after a UN-sponsored ballot that was seen as a sham by many. Since then, a low-level insurgency has simmered in the mineral-rich region, which is divided into two provinces, Papua and West Papua. Jakarta maintains Papua and West Papua are in integral and indivisible parts of the Indonesian state.

In recent years, some Papua students, including some who study in other provinces, have become vocal in calling for self-determination for their region. Protestors told The Guardian they are demanding the UN be allowed to visit the province immediately – a fact-finding mission has been agreed to by Jakarta but has not eventuated – in order to report on alleged human rights abuses. Protestors say local and provincial government officials are unrepresentative, describing them as puppets of the Jakarta administration.

Protests in several cities in Papua and West Papua provinces have turned violent over the past week, but Prasetyo said the situation is now under control and activities have returned to normal in recent days. Students have marched in the capital Jakarta, and in West Papua’s largest city Sorong, waving the Morning Star flag, representative of the Free West Papua movement.

Chairman of the United Liberation Movement for West Papua, Benny Wenda, who is exiled from Indonesia, said racist discrimination against Papuans in Indonesia had fuelled Papuan desire for independence.

“Now my people are launching a second wave of demonstrations and the time has come for us to reclaim our country.”

The Indonesian government has blocked internet access in the region since last week to “accelerate the process of restoring security and order in Papua and its surrounding areas,” he said.

Verifying news from Papua and West Papua has been made difficult by the internet shutdown.