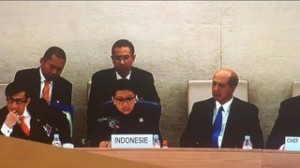 The Indonesian delegation headed by the Minister of Foreign Affairs responded to the review of UN member states – Doc. Author

The Universal Periodic Review (UPR) for Indonesia at the UN Human Rights Forum has just been completed. The Indonesian government represented by a large delegation led by two ministers presented Indonesia’s human rights accountability for the last 5 years (since UPR 2012) with diplomatic confidence. The upholding of human rights in Papua has become a central issue, in response to the increasing intensive concerns and concerns of the international community over the situation in the region. A number of major allies are asking crucial questions and statements. While the seven Pacific States are firm against Indonesia on the issue of Papua it chooses not to attend. How is the development of the Papuan problem in the international arena?

Especially on Papua, there are at least four matters of accountability of the Government of Indonesia in the UPR forum.

First, that the government is accelerating development as a solution to various problems in Papua. It was reported that “the President regularly visits these two provinces to check the progress of infrastructure development” and “directly dialogue with Papuans”.

Second, the Government of Indonesia “has a very strong commitment to resolve issues of injustice and human rights violations. A team under the leadership of Menkopolhukam has been formed. Promised also that the case of Paniai, Wamena, and Wasior will soon be processed in the Supreme Court.

Third, that “the Government has also lifted restrictions on foreign journalists to visit Papua.” Papua is already open to the international community.

Fourth, that Papua Special Autonomy has been implemented to improve effective local governance and development, and for that reason Papua has received substantial funding.

Interestingly, in response to the report of Indonesia, some countries are simply asking simple questions and statements; Namely the fact of its implementation concretely.

There are at least nine countries that specifically highlight the concrete situation of human rights enforcement in Papua. These countries are Switzerland, Germany, the United States, Belgium, Austria, Australia, the Netherlands, New Zeland and Mexico (other countries only mention the substance of the problem, without specifically mentioning Papua) .Otherwise they question the steps and progress of the case resolution conket Paniai, Wasior, and Wamena which has been repeatedly promised by the Government. They also highlighted violence against local journalists and human rights defenders, as well as a concrete form of abolishing the ban on foreign journalists in Papua. The United States, Australia, Austria and New Zealand have specifically highlighted cases of arrests of activists in peaceful action as well as restrictions on freedom of expression and expression. END_OF_DOCUMENT_TOKEN_TO_BE_REPLACED

Benny Wenda looked entirely incongruous as his face hovered over a plate of bacon and eggs, his chieftain’s neckwear, pig tusks at the end of a necklace adorned by shells—he calls it his “tie”—hanging from his neck to rest against his tiny frame, as we sat in the dining-room of a house in a sleepy South Auckland suburb. I was asked not to identify its location for fear of Wenda’s safety, or photograph him with any locatable features in the background; Wenda had that morning flown in from England, and his team told me they had suspicions that people with ties to the Indonesian Government had monitored his arrival.

That same government arrested Wenda in 2002, accusing him of inciting a riot in Abepura, even though he wasn’t in the country at the time. Fearing for his safety he broke through the ventilation unit of a bathroom, and scaled a wall topped with broken glass—he leaned across the table to show me the scars on his palm—dodging searchlights and guards, eventually fleeing through the jungle and across the border to Papua New Guinea. He was later granted political asylum in the UK.

“My people are crying for justice and freedom. I’m on a mission.”

We spoke for close to an hour as he recounted his life and the struggles of his people, at times his eyes filling with tears, at others with laughter. I asked him how it felt to have been away from his home for such a long time. “Very difficult because my heart and my mind is with our people and our land and our mountain. It’s very difficult… I am not in the UK for a better life, but because my people are crying for justice and freedom. I’m on a mission. That’s why I keep going and fight until my people are free in their own land.”

Wenda has never known a West Papua free of Indonesia. “I myself have been a witness,” he told me as we began. “I was born with this issue and I grew up with this issue.” Indonesian troops first set foot in West Papua in 1961; in 1962, Indonesia formally took control over the former Dutch colony under the New York Agreement, with the promise of a vote on independence by 1969. In 1967, Indonesia granted Freeport McMoRan—now the country’s largest taxpayer— mining rights in West Papua. When the promised vote arrived in 1969, it was a sham, the so-called Act of Free Choice, in which just 0.2 percent of the West Papuan population voted to ensure West Papua remained part of Indonesia. Wenda was born in 1975. END_OF_DOCUMENT_TOKEN_TO_BE_REPLACED

THE Pacific Island nations of Vanuatu, the Solomon Islands, Tonga, Tuvalu, Nauru, Palau and the Marshall Islands delivered a hard-hitting joint statement today condemning Indonesia’s human rights violations, including crimes against humanity, at the Council of Ministers of the 79-member Africa Caribbean Pacific Group of States (ACP) and called for an eventual resolution that includes support of the right of West Papuan political self-determination.

The statement, made by Johnny Koanapo, a high-ranking member of the Republic of Vanuatu parliament and Parliamentary Secretary for the Office of the Vanuatu Prime Minister, transfixed the packed council room as he graphically described Indonesia’s violations and West Papuans’ ‘slow-motion genocide’.

West Papua, the western half of New Guinea, the world’s second largest island, has been under Indonesian rule since the 1960s.

Koanapo said that the seven Pacific nations were ‘very concerned [that] the international community had neglected the voices of the Papuan people over the last 50 years’.

The ACP, he stated, was the right place to seek further support for the plight of West Papua because African and Caribbean countries are ‘the oldest defenders of West Papua’s right to self-determination’ and consistently tried to defend the Melanesian West Papuans as they ‘were passed from one colonizer to another’ more than a half century ago. The ACP, which was founded in 1975, is comprised of almost all former colonies itself.

As some among the hundreds of country delegates and staff nodded in strong agreement, Koanapo called Indonesian governance and massive state-backed settlement an ‘Apartheid-like colonial rule’ that was ‘slowly but surely’ going to wipe out the West Papuans as a people ‘while… the world stood by’.

Estimates of indigenous West Papuans killed during Indonesia’s rule range from 10 to 25 per cent of the population, he said, or several hundred thousand people. He added that Indonesia’s own National Commission on Human Rights has described its country’s actions as crimes against humanity.

“According to numerous reports, those deaths and all the associated acts – the violent arrests of non-violent protestors, the beatings, the torture, rape, disappearances, extra-judicial executions, intimidation of the local Papuan media, the barring of foreign media from the territory – have continued through the 20 years of [Indonesian] democracy,” Koanapo said.

“However, this forgotten race [is] still fighting.”

Under a policy of state-supported population movement, more than two million Indonesians have also settled in the territory. They now outnumber the indigenous Papuans and dominate the economy and almost every arena of life in the cities, towns, coastal areas and growing zones of mining, logging, gas and oil production and plantation agriculture.

The West Papua advocacy team in Brussels.
After the meeting, Koanapo stated that the day’s discussion sets up the great likelihood of a resolution on the full range of West Papua issues at the next ACP ministerial council meeting, which is scheduled for this coming November. A number of ministers and ambassadors later approached Koanapo to thank him for his ‘extraordinarily powerful’ speech.

During the past several years, the coalition of Pacific Island nations, echoing the West Papuans, has argued in regional and international venues that Indonesian violations will not be ended by focusing just on human rights. There needs to be a proper act of self-determination or the conflict, which damages Indonesia, as well as West Papua, will continue indefinitely. The ACP appears to be coming to the same conclusion.

This is the fourth round of ACP discussions and sharing of information on West Papua. ACP meetings at the subcommittee and ambassadorial level during the past two months have elicited almost universal affirmations of strong support for West Papuan self-determination among delegates from Africa and the Caribbean.

At today’s Council of Ministers, the Papua New Guinea ambassador Joshua Kalinoe, whose country shares a 760km-long border with its powerful Indonesian neighbour, was the only delegate to speak against ACP moving forward on such a resolution in the months ahead.

The PNG ambassador conceded that no one is denying that the human rights violations are going on. He suggested that a fact-finding mission to West Papua might be necessary for the ACP to get a clearer picture of the situation.

Ambassador Alfredo Lopez Cabral from Guinea-Bissau spoke directly after the PNG ambassador, comparing the plight of West Papua to East Timor, which Indonesia violently invaded and occupied for 24 years. More than one quarter of East Timor’s population reportedly died as a direct result of Indonesian rule.

Guinea-Bissau and other former Portuguese African colonies were leaders in the long campaign on behalf of East Timor, which had earlier been a colony of Portugal, and is now the independent country of Timor Leste.

Ambassador Cabral said that there was no reason why the ACP shouldn’t take up the issue and help West Papua gain a similar referendum on independence to what East Timor finally received after the fall of Indonesia’s Suharto dictatorship in 1998 and mounting international pressure.

West Papuans have long argued that they are geographically, racially and culturally part of the Melanesian Pacific, not Asian Indoneisa. During the 1940s and 1950s, even leaders of the Indonesian independence movement, such as Mohammed Hatta, his country’s first vice-president, stated that Papua had not been part of the Indonesian struggle and needed to become a separate nation. At the time, observers expected West Papua to become the first independent Pacific Island nation.