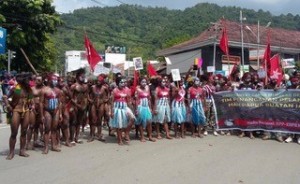 Papuans hold a self-determination rally on Wednesday in Sentani, Papua, demanding that the government conducts an independence referendum for the eastern province. (KNPB/Exclusive)

Sorong Police in West Papua province confirmed they ordered a group of people praying on SPG Sorong field on Saturday to disperse and accused the congregation of separatism because the police claim the congregation yelled, demanding independence.

The event was organized by West Papua National Committee (KNPB) to celebrate their eighth anniversary by organizing an event to pray together.

KNPB said the police accused the seven of treason and provocation.

Sorong Police chief Adj. Sr. Comr. Edfrie Maith said they only detained seven of them for 24 hours, in compliance with the procedure.

“It’s our duty to question them within 24 hours. After we questioned them, we released them,” Edfrie said.

Veronica Koman, a public interest lawyer with Papua Itu Kita, who often helped KNPB with legal advocacy, said the seven were released on Sunday, but they had to report to the police daily.

Edfrie said the police ordered the event to disperse because in the event notification letter from KNPB, the organization used a symbol that is not an Indonesian symbol. “Of course we didn’t let them organize it, they refuse to acknowledge the Republic of Indonesia,” he said on Sunday.

Veronica said KNPB produced a notification letter about the event using the KNPB logo, which was the usual procedure for any other organization. “The stamp resembles the Morning Star flag, but I think that’s beside the point. This is an attempt to muffle freedom of expression in Papua,” she said.

Gema Demokrasi, a Jakarta-based network of 75 civil society organizations, criticized Edfrie’s statement in which he made a deal with Sorong journalists not to publish the story. “Sorong journalists and I have agreed not to make news of the event. They intentionally made such an event to get some outside exposure to be acknowledged,” Edfrie said as quoted in tabloidjubi.com.

Gema Demokrasi said Edfrie’s attempt was a violation of the 1945 Constitution on freedom of expression.

KNPB is an organization promoting self-determination for Papuan people.

Grasberg mine in the Indonesian province has been a source of untold wealth for its owners, but local communities say it has brought poverty and oppression

The delta of West Papua’s Aikwa river, on Kamoro tribe land. Papuans claim tailing sediment from the mine has suffocated the fish and shrimp on which their diet and economy are based. All photographs: Susan Schulman

Today, these remote, sharp-edged mountains are part of West Papua, Indonesia’s largest province, and home to the Grasberg mine, one of the biggest gold mines – and third largest copper mine – in the world. Majority-owned by the American mining firm Freeport McMoRan, Grasberg is now Indonesia’s biggest taxpayer, with reserves worth an estimated $100bn (£80bn).

But a recent fact-finding mission (by the Brisbane Archdiocese’s Catholic Justice and Peace Commission) described a “slow-motion genocide” (pdf) taking place in West Papua, warning that its indigenous population is at risk of becoming “an anthropological museum exhibit of a bygone culture”.
Since the Suharto dictatorship annexed the region in a 1969 UN referendum largely seen as a fixed land grab, an estimated 500,000 West Papuans have been killed in their fight for self-rule. Decades of military and police oppression, kidnapping and torture have created a long-standing culture of fear. Local and foreign journalists are routinely banned, detained, beaten and forced to face trial on trumped-up charges. Undercover police regularly trail indigenous religious, social and political leaders. And children still in primary school have been jailed for taking part in demonstrations calling for independence from Indonesia.

“There is no justice in this country,” whispered one indigenous villager on condition of anonymity, looking over his shoulder fearfully. “It is an island without law.”

Dozy had not set out to find gold in 1936; his goal was to scale the region’s highest glacial peak. But his discovery sparked the interest of Freeport Sulphur – later to become Freeport Minerals Company and then, through a 1981 merger with the McMoRan Oil and Gas Company, Freeport McMoRan – whose board of directors included the well-connected Godfrey Rockefeller (serving from 1931 until the early 1980s) and Henry Kissinger (1988-1995).

Today, indigenous tribes such as the Kamoro and the Amungme claim their communities have been racked with poverty, disease, oppression and environmental degradation since the mine began operations in 1973.

To read the full article click on the link below

While government teams are working to identify fatal incidents that have led to human rights abuses in Papua to gain the trust of its people, former political prisoner Filep Karma said on Tuesday that a referendum should take place to determine the future of the restive region.

Filep, who was released after being granted clemency by President Joko “Jokowi” Widodo last year, said the process would reveal the aspirations of Papuans.

“Let us see whether the majority of Papuans want to stay with Indonesia or leave,” he said during an event held by Setara Institute.

As part of Jokowi’s commitment to improve welfare for Papuans, 70 percent of whom voted for him during the 2014 election, the President has prioritized the region in development programs as well as taken bold moves to mend ties with Papuans, who have been victims of discrimination and violent incidents with security officers.

After releasing five political prisoners, including Filep, last year, Jokowi has been more aggressive in his efforts to accelerate development in the region.

In his last visit to Papua last week, he announced a “one fuel, one price” policy for the region, ordering relevant institutions to ensure a consistent fuel supply, the lack of which has often been a hurdle hindering economic activities.

The government also established a taskforce under the supervision of the Coordinating Political, Legal and Security Affairs Ministry that it assigned to identify rights abuses connected to all violent incidents that have occurred in Papua, but questions linger over the fate of the team’s assessment. Following the deadline of its term on Oct. 25, the team has yet to announce its findings.

A copy of the team’s temporary report obtained by The Jakarta Post cites four incidents that involved human rights abuses: the 1996 military operation to rescue 12 foreign and Indonesian scientists abducted by the Free Papua Movement (OPM) in Papua’s hinterland of Mapenduma; the 1998 Bloody Biak, a tragedy that claimed the lives of more than 100 Papuans following a hoisting of the Morning Star Flag, a symbol of resistance, in the coastal town of Biak Numfor; the killings of civilians by military and police personnel in Wasior in 2001; and the 2004 tragedy in Wasior where a joint police and military operation tortured and killed civilians from 25 villages following a break-in at a military arsenal.

The report said that two of the incidents, the 1996 Mapenduma operation and the 1998 Biak tragedy, would require a political decision from the House of Representatives for resolution because they occurred before the implementation of a 2000 law on establishing a human rights tribunal.

The report said that the fate of the 2001 Wasior incident and the 2004 Wamena tragedy should wait for a final conclusion by the National Commission for Human Rights (Komnas HAM) and the Attorney General’s Office (AGO), which have adopted different stances on the cases.

Komnas HAM has declared the two cases to be gross violations of human rights, while the AGO has demanded more evidence. The AGO’s requirement for evidence has also extended to another five abuses that occurred in other parts of the country that Komnas HAM has already declared to be historic human rights abuse cases. This has delayed settlement of all cases, including the killings in Wasior and Wamena.

Separately, Komnas HAM has conducted independent investigations and identified 14 cases of rights violations. The chairman of Komnas HAM, M. Imdadun Rahmat, included the unresolved shootings of civilians in Paniai on the list of rights abuses that needed immediate resolution, in addition to the Wasior and Wamena incidents.

“We must revise all laws on human rights, including the 1999 law on Komnas HAM, to give the rights body the power to prosecute. Otherwise we will never see any cases solved because of political obstacles,” said Bonar Tigor Naipospos from the human rights watchdog, the Setara Institute. “We are also in dire need of prosecutors with adequate human rights knowledge at the AGO.”